Although I’m a Barcelona (football) fan myself, Madrid was one of my favorite cities in Spain to visit. I went there in 2009 while studying abroad and again in 2015. Here are 5 places you MUST go and see:

Since I was a Spanish major at university, I came across a lot of Spanish literature, history and art. One of the painters we spent a lot of time on was Velazquez. One of his famous paintings, Las Meninas, is housed at El Prado, and it is a worthwhile painting to view. If you fancy to view La Guernica, Pablo Picasso’s masterpiece, hop over to el Museo Reina Sofia. It’s one of the most stunning paintings. For a lot of people, the abstract concepts turn them off. However, if you spend some time to learn about the horrors committed during La Guerra Civil (the Spanish Civil War), you will come to really appreciate the story behind it, and even some of the more abstract elements of the painting will make sense.

This palace is one of my absolute favorite places in Europe. Each of the rooms was decorated so beautifully with handmade ornaments. It was so fascinating to see how the famous people in Spanish history used to live (hint: they lived really well). 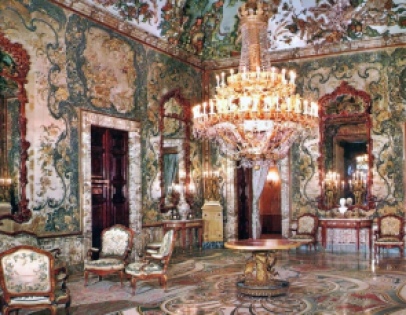 One of the intricately designed rooms in the Palace.

The architecture of this building is so pleasing to the person with OCD (or anyone in general). Everything is symmetrical, with perfect lines and angles. It is no doubt that Juan Bautista de Toledo designed this building to make it last. Started in the mid 1550’s, it was King Felipe II’s attempt to keep the country from joining the protestant movement. Many catholic monasteries (such as El Escorial) were built in order to preserve and encourage the Catholic faith. This building also served as a palace, a Pantheon of the Kings (a load of Spanish royalty is buried in this building), a library, and has a few spectacular works of art such as the Hall of the Battles. I got to experience this national treasure for myself in January of this year. It is an incredible place to go, and I highly recommend it. 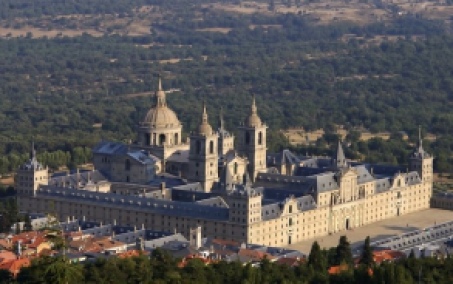 The Plaza Mayor in Madrid is a prime location for people watching and to have a coffee. This is the central plaza in Madrid, so everyone comes through it. It is a bustling area with lots of cervecerias and cafes, and many personalities. Come with a book, or with a friend, and relax.

This park was exclusively used by the Spanish royals for many centuries. Now, it’s open to us commoners as well! When I went to Madrid in 2009, we spent quite a bit of time there, and walked around the grounds. There is a glass palace, paddle boat rentals, gardens upon gardens and many beautiful statues and memorials. If you fancy a royal stroll, you know where to go!

The group of us from my study abroad year at el Parque!

I like to document my fitness journey, my trials and errors with trying to live a (mostly) Paleo lifestyle, my travels and adventures, fashion and beauty finds, things I'm reading, my love for coffee and wine, and some of my thoughts on this little corner of the internet!

Welcome to my little Hull (and beyond!) lifestyle blog. I like to document my fitness journey, my trials and errors with trying to live a (mostly) Paleo lifestyle, my travels and adventures, fashion and beauty finds, things I'm reading, my love for coffee and wine, and some of my thoughts on this little corner of the internet!