I could not wait to start my holiday to Tenerife. Not only was I going to an exotic location, but I was also going to see my boyfriend! We have a long distance relationship, so when we want to see each other, we always have to travel someplace to see one another. Usually it’s Alicante, Spain or Kingston Upon Hull, England. This time, he came up to England from Spain to visit London with his friend. After finishing that leg of his journey, he came up to Hull, soon after we went to Leeds to take a flight to Tenerife Sur Airport.

The evening before departure, I had waited to call a taxi until right before going to bed. In the past, I never had an issue reserving a taxi that late. Besides, I thought, our train wasn’t leaving until 7:30. I finally got around to calling at around midnight, and to my surprise, there were absolutely no taxi’s available after 5 am! The local rugby team, the Hull Rovers, were playing a match at Wembley in London, and half of Hull decided to go. This meant we were going to have to walk, and we had a lot of suitcases and things to carry. This was definitely not ideal, especially since I live about 45 minutes away on foot. Note to future self: always book anything at least a few days in advanced!

When we woke up the next morning at 5 am, I thought I would give the taxi another shot. I called and they miraculously had a gap at 6 am. I claimed that slot so quickly, an auctioneer would of had a run for his money! Our trip was off to a good start, and a lucky one at that! 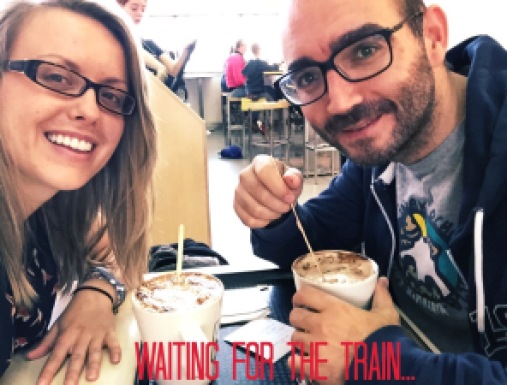 {We were extremely relieved to be at the station, irregardless of how early!}

We got to Leeds, took the bus to the airport, and soon enough we were on our way. We flew with Ryanair, and I wasn’t entirely pleased with them. Ryanair charged me an extra 50 pounds to check in my carry-on, because the bag didn’t fit properly in their luggage comparison bin. The only reason it didn’t fit was because it was weird shape, and the wheels were sticking out oddly. The fee irritated me, but nothing could spoil my mood entirely! I was going to paradise with the sweetest man!

Prior to the trip, we decided to rent a car in order to get around the island. The agency we used was Gold Car, and it was quite a smooth process. We had a nice car and were very comfortable. The only thing that was a bit surprising was that you will have to buy insurance on the car, and at first they tried to push the 900 euro deposit. After much discussion, they offered a 75 euro deposit instead which was far more reasonable. Make sure to read the fine print!

We finally arrived at our hotel called Globales Tamaimo Tropical, in Puerto de Santiago, near the cliffs “Los Gigantes”. Our room was a bit dated, but we were so exhausted and excited that we didn’t really care too much. It had everything we needed: a place to sleep, a kitchen, a bathroom and it was clean.

{View from the room}

Puerto de Santiago is surprisingly quiet, for a resort town. The beaches are laden with volcanic rock and surprisingly fairly empty. Maybe the season was a bit off (we were there the 29th of August to the 4th of September) but there just weren’t as many tourists, which was a bit nice since we really wanted to disconnect.

Tenerife was the perfect escape. If you don’t believe me, I have more photos below!

{Volcanic rocks and a view of the neighboring island, La Gomera}

{Sunset on the beach}

Keep an eye out for more posts about my trip to Tenerife!

And if you have any questions please feel free to email me at caffeineberry@gmail.com

I like to document my fitness journey, my trials and errors with trying to live a (mostly) Paleo lifestyle, my travels and adventures, fashion and beauty finds, things I'm reading, my love for coffee and wine, and some of my thoughts on this little corner of the internet!

Welcome to my little Hull (and beyond!) lifestyle blog. I like to document my fitness journey, my trials and errors with trying to live a (mostly) Paleo lifestyle, my travels and adventures, fashion and beauty finds, things I'm reading, my love for coffee and wine, and some of my thoughts on this little corner of the internet!